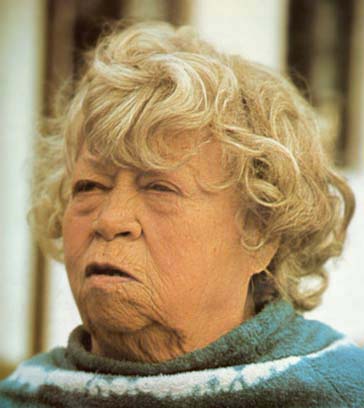 Kirsten Kjær was born on 14 November 1893 in the small village of Vester Thorup far out in the country between the Limfjord and the North Sea. Her father ran the local dairy. She was a very sensitive child, and as a young woman it was difficult for her to find out who she was. She married a painter, Frode Nielsen, in 1918, slightly against her will. She could not adapt to ordinary, provincial married life, and in the years 1921-23 she joined a theatre group and was seriously thinking of becoming an actress. However, in 1924 she had a nervous breakdown with a severe depression, and at the same time she underwent an abdominal operation for tuberculosis. She recovered after convalescence with her parents in the country, and in September 1925, almost by chance, she painted her first portrait. From then on she knew what she wanted. She went to America with Frode, and there in 1926-29, she experienced her real breakthrough as an artist. She separated from her husband in America, returning alone to Denmark where she was given some recognition as a painter. She spent some months with the then world-famous authoress Karin Michaëlis who wrote a book about Kirsten’s time in America. But Kirsten felt that the book exposed her private life too much to the public, and the following winter (1930-31) she travelled to Paris and Mallorca.

In the meantime she had met the newspaper editor and author, Anders Olsen, to whom she gave a lot of attention, support and love, and with whom she spent some years in Århus.
She went to Skagen for the first time in 1933, meeting many interesting people and making new friends. She was able to live free of charge with Ingeborg Østergaard at the Skagen hotel. The following year she met two Swedish literary women, the authoress Brita von Horn and the poet Elsa Collin, with whom she fell deeply in love. They had their own house in Skagen, but returned to Stockholm for the winter, where they tried to introduce both Kirsten and Anders Olsen into the local art circles. Through Anders, Kirsten made contact with several politicians and actors who became her models, but she did not find time to paint as much as she wanted. Anders died in 1938, and the Second World War was approaching. Kirsten started to help political emigrants, and during the war she had to obtain false identity papers because her flat was used by the resistance.
In 1943, at her 50th birthday, the society “The Friends of Kirsten Kjær” was created to support her economically so that she could afford to maintain her flat in the centre of Copenhagen. Without this society, it would have been very difficult for Kirsten to survive, and to have a base to which she could always return from her many trips: to the ruins of Warsaw in 1947, to Lapland seven times during the following years, to Iceland from 1955-57, and to Tunisia and Liberia during the 1960s. She retained her ability and lust to paint until late in life; she was 91 when she started her last painting at the old folk’s home near the Museum.